4748 days ago, the first T is for Training happened. I had an idea to start a podcast for library trainers, since we were usually the lone wolves in our places of work.

It was a pilot show with three friends, Beth, Bobbi and Jennifer, and we talked about 23 Things and learning while playing (remember that?), Active Shooter Training (unfortunately still needed) and a Trainer Bi*ch Session (also still needed.) With show links on Delicio.us *RIP*

Unfortunately, those older shows, along with the first 150 episodes or so, are lost in the ether.

If you happen to have any copies of our older shows, drop us a line!

This show as survived MANY changes.

But we still try to do something useful every two weeks (most of the time.)

The real first show took place on September 12th, 2008. But the show on August 29th is the first place T is for Training happened.

It has been a long and fun thirteen years and counting.

Thank all (five) of you for listening, and I hope you all continue to support us with your kind words and thoughts.

Also JOIN US on a Thursday night. You know you want to…

I have the current pleasure of attending the 2019 ATD International Conference https://atdconference.td.org/ in Washington DC for the next couple of days.

I have some cool new lightweight equipment to record some interviews (which I already have put to good use) and will be sharing some things here as well as on the feed for the show.

Highlights of today include a great presentation from Paul Signorelli, Koko Nakahara, Evert Prius and Amit Nagpal gave a presentation on Implementing Machine Learning and AI in Learning—Global Cases and Best Practices. 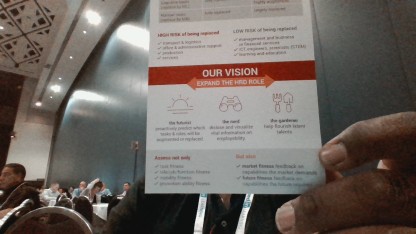 Also, I interviewed Paul after the program about his session and then interviewed @HalellyAzulay host of  @TalentGrowShow and author of Employee Development on a Shoestring from ATD Press.

The interviews will be on this page and on our Talkshoe page soon.

On the call were Maurice Coleman, Andrea Snyder, and Jill Hurst-Wahl.  We began with this quote:

One challenge with learning—and where most get stuck—is the emotional challenge that results from being confronted with not knowing. Being wrong is typically more comfortable than uncertainty, which is why we have to learn to let go. In whitewater kayaking that may mean literally dropping into something scary in an entirely new way—and remaining open to that experience. With the proper mindset, curiosity is more powerful and certainly more useful than fear. – From “Winning When It Counts“, Spirituality & Health

You can listen to the episode here.

Addendum: Andrea found this after we were done recording: A Quick Note On Getting Better At Difficult Things

Talking about what Courtney Young, current ALA president, has learned from her ALA travels thus far. Then the conversation moved onto interesting library spaces, including libraries that are in shopping malls and libraries that have innovation space.

Courtney was asked about the non-book[1] things that she has seen, as she as traveled:

Maurice mentioned the loaning of American Girl dolls through his library.  It was mentioned that you have to consider your community and ensure that the programs (e.g., how to raise roosters) is appropriate.

You can listen to the show here.

[1] As Andrea mentioned, books are a container.  Information comes in a variety of containers.

The first T is for Training of 2015 (recording) and the participants were Maurice Coleman, Andrea Snyder, Paul Signorell, Jill Hurst-Wahl, and Steve Thomas.  The conversation began with discussing:

This T is for Training can be listened to here.

The recording can be downloaded here.

Announced during the recording is that Maurice and Jill are giving a webinar on Oct. 8, 7-8 p.m. ET on “Giving Your First Conference Presentation”.  Details on this free webinar are available here.

Join us today at 2 pm eastern for virtual cake and adult beverages and training and library talk.

Hope you can come by.

Or come to our ALA taping On Monday at 4 pm in the Networking Uncommons.

Got something to say about training? Libraries?  Library Training?   Come join us tomorrow at 2 eastern time for a conversation that is only a phone call away.

Hope to see you then!

We returned on the 13th of January 2012  with a show featuring @jill_hw and @baldgeekinmd discussing information freedom, sources, resources and many other topics, such as the WHITE HOUSE allows you to start electronic petitions on its site.  Yeah, that White House.

Download Episode 90 “You Can Get It, But Who Wrote It?” here

Today, 27 January 2012, we recorded another fantastic show.   Called ” Honey, People Don’t Walk In Texas”  was a ride about ALA Midwinter, Life, Dallas and other fun topics.  Featuring @librarian_kate @alsnyder02 @strnglibrarian, and Diane Huckabay (our newest USUAL SUSPECT!!!!! ) of Washington State on the call.

How to Go High Tech on a Small Budget:  Workshops happen on February 1st and 8th SIGN UP HERE!
Creating Presentations that Don’t Put People To Sleep: Happening on March 29th SIGN UP HERE!

For those who depend on our RSS feed to know when shows are going on, I apologize.   Still with the crazy busy at work and in life. (all good by the way) I have not been able to post individual posts about the last two shows.  Follow @tisfortraining on twitter there for the most up to date news.

Both Tired, @librarian_kate on dayquil and me on coffee: @tisfortraining 88 An Angry Bird: bit.ly/t0waL8 a short show.

Tomorrow’s show:   How the change in reading effects training:  http://t.co/prCjyPaQ and our holiday questionapalooza.

And Happy Holidays to you all.

We record via a phone call every other week.

You can stream T is for Training episodes from January 2015 forward via the following link:

T is for Training Page on Talkshoe

If you are reading this, you are invited to join the call.

Come hang with us for fun, frolic, and some real professional development.

Before joining the show, it is a good idea to sign up for a Talkshoe (www.talkshoe.com) account.

and so it goes…

Mark your calendar and join us!
Really.
We. Want. You. To. Talk.

T is for Training Feed

Search T is For Training

T is for Training
Blog at WordPress.com.
Loading Comments...